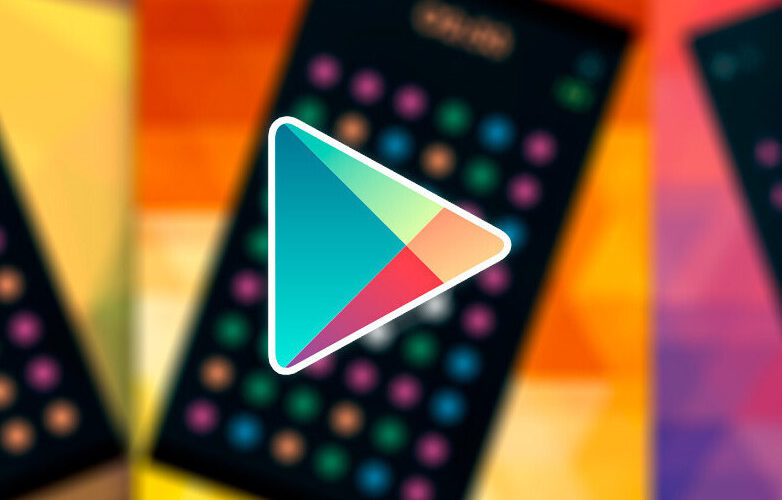 FacebookTwitterPinterestEmailWhatsApp
Home » 24% more than in 2020, according to Sensor Tower
Applications

According to Sensor Tower data, in the first half of 2021 user spending on apps was record high, both on iOS and Android. App Store and Google Play Store have registered figures 24.8% higher than the same period in the previous year.

Revenues and downloads have increased in both stores, with protagonists who already sound like TikTok, YouTube or Tinder at the top of the list. We are going to tell you how the first half of the year has developed in revenue and app downloads, according to the data that the consultant has made public.

2021 starts with a record for applications 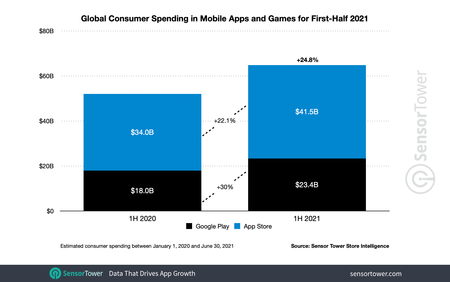 Global spending on mobile apps in the first half of 2021.

Global user spending in the first half of 2021 was $ 64.9 billion, adding data from the App Store and Google Play Store. This represents a 24.8% year-on-year growth compared to 2020, the year in which it reached $ 52 billion in revenue.

The App Store continues to generate almost double the revenue of the Google Play Store, although the latter also grows in 2021

Specifically, dividing by store, App Store generated 41,500 million, while Google Play Store stayed at 23.4 billion in the same period, 1.8x times less than with respect to the Apple store. Despite this difference, Sensor Tower anticipates that Google’s app store grows more year-on-year. Play Store revenue in the first quarter of 2021 grew by 30%, while Apple’s growth was 22.1%, a not inconsiderable figure. 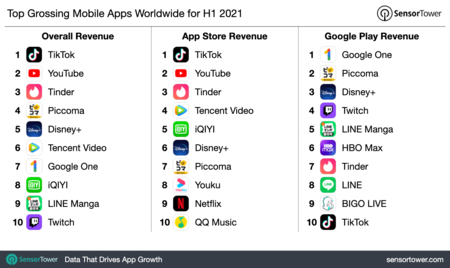 Apps that entered the most in the first half of 2021.

TikTok was the queen on the income chart during 2020, and will do so again during 2021. It is the most popular app in the world on both iOS and Android. Specifically, Sensor Tower talks about more than $ 920 million was spent within TikTok, 74% more than last year.

YouTube followed in second place, with consumer spending of $ 564.7 million. On the list, there are also prominent names, such as Tinder, Disney +, Google One or Twitch.

If we talk about application installations, in App Store there was a small drop, falling 10.9% to 16.3 million installations. On the Android side, you are increased 6% year-on-year, up to 56.2 million. As can be seen, Many more applications are installed on Android, but much less money is spent on them.

A good year for videogames too 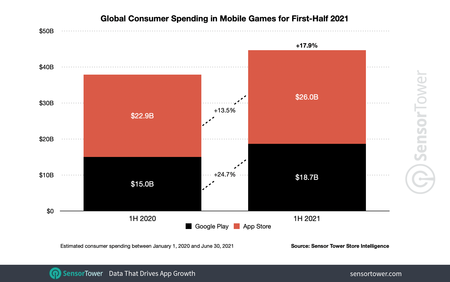 Global spending on mobile games in the first half of 2021.

If we talk about the world gaming, global spending on games reached $ 44 billion in the first half of 2021, an increase of 17.9% year-on-year. This expense is divided into 26,000 million by Apple and 18.7 million of income by Android. 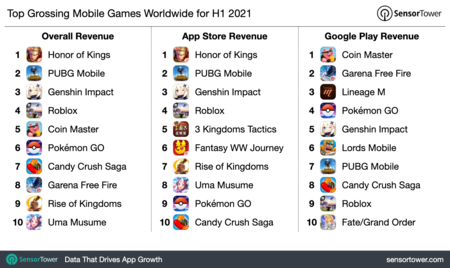 Mobile games that entered the most in the first half of 2021.

The main protagonist was ‘Honor of Kings’, which brought in more than $ 1.5 billion, followed by ‘PUBG Mobile’ and ‘Genshin Impact’. On Android, games like Coin Master or ‘Garena Free Fire’ had a greater role.

Despite an increase in spending, game downloads decreased in 2021. Specifically, a drop of 22.8% in the App Store compared to a small growth of 3.7% in the case of Android.

As can be seen in both apps and video games, more and more money is being spent in app storesAlthough the number of installations is starting to slow down in the first of 2021, it remains to be seen how the rest of the year unfolds.