a great puzzle adventure ‘made in Spain’ lands in Apple Arcade

Alike Studio, an independent studio in Barcelona made up of only four people, has created a great puzzle adventure with a more than original format. This is ‘All of You’, a game that has just landed on Apple Arcade and is intended as an alternative for the whole family. In the game we’ll have to play with time and scenarios to solve the puzzlesin a quite different way than usual.

We have tried the game to tell you our impressions, although we can already tell you that is taken care of on virtually every levelThe new system is a new way of working, and it stands out both visually and in terms of sound.

A beautiful adventure that will put our ingenuity to the test

In ‘All of You’ we will accompany a hen as she rescues her young. The format is very different, since there are different circles on the screen, and in each of them an action happens. This means that we will have to play with the actions of the different circles to solve the puzzles. This may sound a little confusing, so let’s look at an example.

In this, the first levels, we have three circles: the hen’s circle, the intermediate circle and the chick’s circle. The goal is for the hen to meet the chick. If we click on the hen’s circle, it will start and cut the rope, but as you move to the next circle, a piece of wood will fall on you (because we’ve cut the cord). What we will have to do (don’t worry, we won’t spoil the level), is to look for a way for the wood to fall before the hen passes through that circle.

It’s a very different and fun gameplay, which will become more and more difficult as we go along, accompanied by a careful, but very simple, visual (something that will help less powerful iPhones to run it). The sound section of the game is also very interesting. 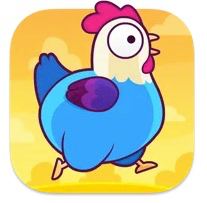 All of You’: a great puzzle adventure ‘made in Spain’ lands in Apple Arcade