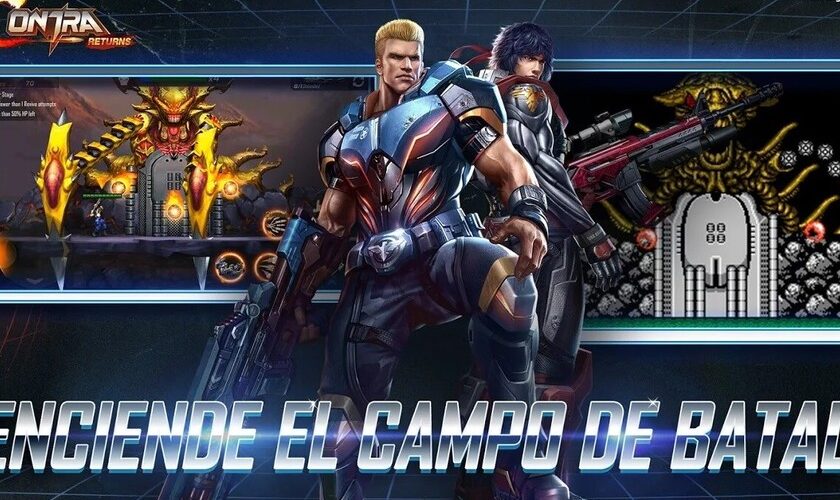 FacebookTwitterPinterestEmailWhatsApp
Home » ‘Contra Returns’ comes to iPhone and Android this month, a new run & gun that you can now pre-register
Applications

‘Contra Returns’ comes to iPhone and Android this month, a new run & gun that you can now pre-register

Konami has no intention of leaving one of its historical franchises alone and is already finishing a new installment of Contra for mobile phones. Is about ‘Contra Returns’, the return of the saga to the land of run & gun in two dimensions after the controversial ‘Contra: Rogue Corps’ that changed the rules of the game for the franchise.

As expected for several generations, the mobile title of the Contra saga will be available only for iPhone and Android and its arrival is very close. So much so that Proxima Beta, the studio responsible for its development in association with Konami, has already opened the pre-registration phase before its launch on July 26.

Go heating the trigger finger, that you come out

In ‘Contra Returns’ we can unleash our inner rage throughout more than 200 levels in which we will have to riddle countless enemies who will try to stop our career, and also a good handful of final bosses who will raise the level before the closing of each of their chapters.

Taking advantage of the very effective nostalgia, Tencent takes advantage of ‘Contra Returns’ to rescue some heroes who have appeared in previous installments of the saga such as Bill Rizer or Lance Bean. All this is configured in an entire action title that can become an essential even for those who still do not know the historical saga.

‘Contra Returns’ will offer us different game modes than usual as one of online confrontations in 1vs1 battles, and also a survival mode in which we will be forced to face the game with a single life. Quite a challenge that will arrive at the end of the month for both the iPhone and Android and which we can already sign up for in their respective stores.