The ecosystem of applications and services led by Mark Zuckerberg is not at its best when it comes to popularity, thanks to the latest movements of the company in terms of security and privacy. WhatsApp, for example, has suffered (and probably continues to suffer) a user stampede as a result of the publication of the next changes to the platform, now postponed until May.

The parent company, Facebook, is in similar trouble, although in this case it is more of an anticipation of what is to come. Apple will change its ad tracking policy (the App Tracking Transparency or ATT initiative) next March and Facebook may have problems with its app. That is why, in the midst of a sibylline war of declarations between the two companies, Facebook plans to introduce its own ad to alert its customers. 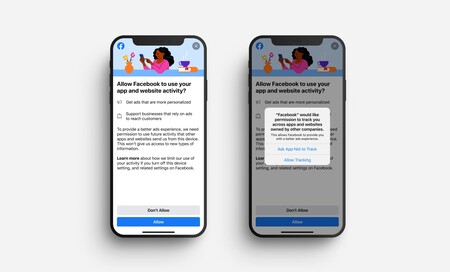 The problem in question is that iOS 14 came with a promise under its arm: to change the way apps track user data to apply it in their advertising targeting. Or rather, limit these permissions or make them more transparent, something that would affect many applications but especially two of its biggest competitors in the market: Google and Facebook.

Finally, Apple granted a grace period in October 2020 for the entry into force of its new way of operating with these apps and this period ends in March. By then, apps that have not changed their transparency policy around this data tracking will have trouble staying in the Apple App Store, and Facebook has decided to carry out a pre-emptive counterattack starting with the United States.

As CNBC indicates, Facebook is already beginning to test a new message in pop-up targeting its iOS users, those “affected” by the new ATT anti-tracking policy to target advertising. These users begin to see (those included in the test) an ad in which Facebook expressly asks them if you want to give the application permission to “provide a better advertising experience”. A message that arrives accompanied by two “Allow / Not Allow” buttons.

These tests, which will also be performed coming soon to the Instagram app for iOS, clearly indicate in their text that they ask users for their permission to collect their experience of use both in the app and on the web to improve advertising. Facebook states that if you accept or refuse, the decision may be reversed in the future through the settings of the app. Facebook thus intends to anticipate the arrival of Apple’s new ATT policy in March.