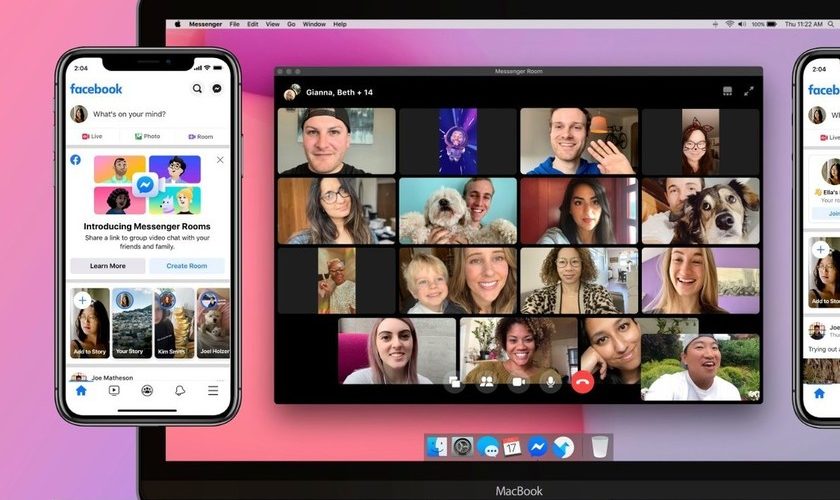 It was only a matter of time before the social networking giant got down to work to bring together in one place the best of the various video calling apps currently offered by its competitors. It’s true that in recent weeks we’ve seen advances in their WhatsApp and Instagram services, with calls from up to eight people for the former and improvements in video for the latter, but still the final step was missing.

This step has arrived and Facebook has announced the creation of Messenger Rooms, your multiple video call service with, as we said, almost everything that’s best in the world. You can make unlimited video calls, with up to 50 people at a time, and bring users of your core services – Facebook itself, Instagram, and WhatsApp – together under one roof. And yes, these calls can be accessed without an account.

A solution to unify all your platforms

With the impressive rise of Zoom, now in the midst of solving its security problems, the rest of the video call world has started to improve by leaps and bounds. Duo has doubled its maximum number of users, Meet is open to any Google Suite user, Jitsi Meet has emerged and Microsoft is doing the same by evolving its Skype platform at full speed.

But the movement of the social network giant, the owner of the largest social network on the planet and, incidentally, the two mobile instant messaging apps with the largest number of users, was missing. Zuckerberg’s move, and it’s already happened. Facebook has announced the creation of its new Messenger Rooms platform that will be active within a week and then expand it over the next few years. 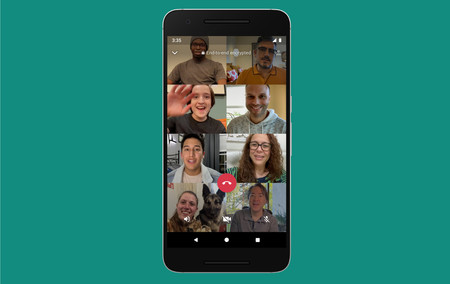 A Rooms can be accessed from mobile, computer and even from Portal

With Messenger Rooms we will be able to create a videoconference room to which up to 49 more users can join to complete a maximum, for now, of 50 users simultaneously. To start these group video conferences we will have to start from Facebook or Messenger initially, although this will be expanded in the near future to start from Instagram Direct, WhatsApp or Portal devices.

Once the multiple video call has started, users with Facebook, Messenger, WhatsApp and even Instagram accounts can join. But there is an interesting feature, that also those users who do not have an account in any of the two services will be able to join them, just by sending them the connection link so they can join. Messenger Rooms will also have no time limit as they do have other platforms. Maybe we’re talking about the ultimate multi-call app.

No apps, encrypted and accessible from anywhere 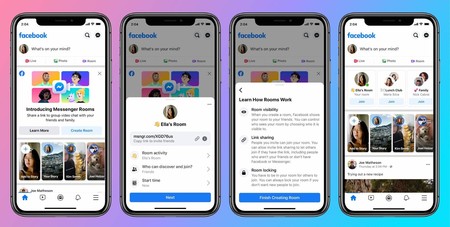 Initially, only Facebook and Messenger will be able to create these multiple rooms in Rooms

Accessing a Rooms videoconference will be possible both from the mobile phone and from the personal computer and it will not be necessary to have the app to do so, since it will also work from the very browser we have at hand. By the way, we can also join from PortalThe Facebook home screen device has been on sale for some time now.

Regarding security, Facebook ensures that Messenger Rooms’ video calls will be encrypted both locally and end-to-end, and that control of these video calls will be in the hands of the creator of each of the multiple rooms. The creators will be able to share the link of the video call with whoever they want and also expel the users they consider necessary. They will also have the power to decide if they want their videoconference rooms to be open or private, and to set the password for access to them.

Video callers will also have some power when it comes to implementing security measures as may inform the platform that illegal content is being transmitted or that violates the privacy of other users. In any case, Facebook itself will not be able to access the content of these video calls as they are encrypted broadcasts, so it will have to rely on the users themselves to maintain order within them.

As an addition from the point of view of personalization, if we have the Facebook Messenger augmented reality app we will be able to personalize our calls with 360º backgrounds and up to 14 filters available. Messenger Rooms will be launched in the next few days and it will take a few weeks to reach the whole planet. Facebook will release the announced features little by little, such as the move from the initial 17 users to the 50 totals promised in their note.