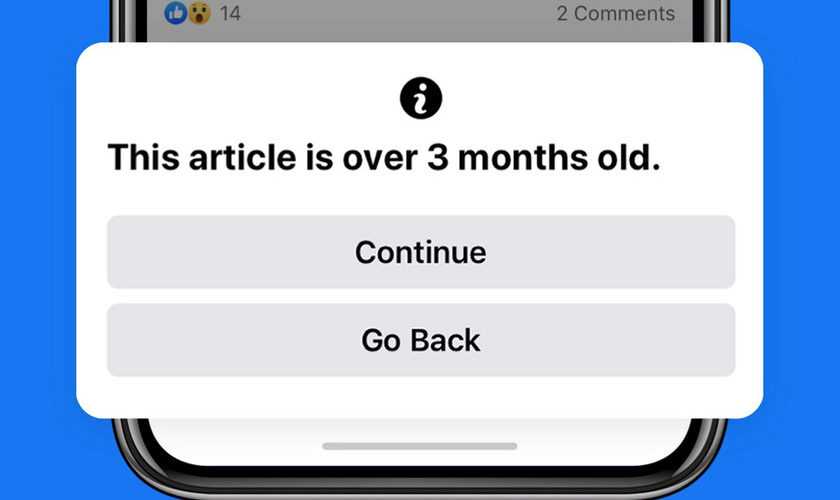 We’ve all been there: you see an article on Facebook that seems to fit perfectly with the times, but it’s actually news from months or even years ago. It will be a little more difficult to get lost in the near future, because Facebook will add a warning before you share any old news.

Facebook has announced that today begins the deployment of a new ad to complement the latest initiatives that try to put in context media and publications in its social network. This ad will appear for articles that have more than three months old.

“This article is 1 year old”

Facebook comments on its blog that some media outlets have expressed concern that their old news is being shared as current in a way that can misinterpret the status of current events. The solution Facebook has found is include a new notice before sharing old news.

The ad is displayed quite prominently, although it does not completely prevent you from sharing the post. Simply an extra step is added so that, after learning that it’s several months old news, you can decide whether you still want to share it or not.

This initiative is reminiscent of another Twitter test we met a few weeks ago and which encouraged you to read articles before sharing them. The problem is the same: that we share without reading what the article says, although each social network has chosen a different path to fight misinformation in this way: Twitter encourages you to read what you share, while Facebook will remind you that the article is more than three months old.

This announcement will be one of the first steps in a series of tests with notification screens that will come later, again similar to those already implemented on Twitter. In the future, notices will be included for publications with links that mention COVID-19 with additional links from reliable sources.