finally it is possible to play ‘LoL’ anywhere

‘League Of Legends’ already has its official mobile adaptation, ‘League of Legends: Wild Rift’. The game has already passed its beta phase and can be downloaded in Spain from this December 10, both on iOS and Android.

It is one of Riot’s most ambitious proposals for this 2020, adapting one of its masterpieces to the mobile territory. Also, It is a fairly accessible game for many of the mobiles on the market, despite being a forceful proposal both graphically and in terms of gameplay.

If you’ve played ‘League of Legends’ before on PC, you’ll soon realize that it’s a very similar game, but not exactly the same. It is not a 100% ported version from PC, but it has been adapted with a somewhat smaller map, without Nexo turrets, fewer levels for champions and with the main objective that games last about 20 minutes, far from the 30 or 60 minutes that PC games usually last. 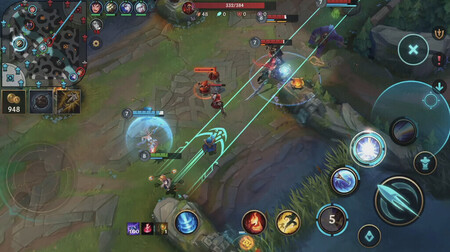 The interface is also less complex than that of the PC, since all the controls have been adapted to make it easy to play using the buttons that the screen will show us. The direct translation of this is that we will not have cross-play with the PC version, and neither does shared progress (what we do in one game and another will be separate achievements).

The gameplay is the same as on PC, but it is a reduced version and adapted to mobiles

The gameplay is the same as on PC, but simplified. We have fewer characters, fewer elements on the map and everything is easier than in the full version. However, still the ‘LoL’, and it is that the visual elements, skills and champions have been taken care of in detail so that everything is faithful to the original game.

On a graphic level, ‘League of Legends: Wild Rift’ is a fairly ambitious proposal. We can force it to run at 60 FPS (they are disabled by default), as well as change the graphics settings to suit our phone.

What is most surprising about the game is that its basic requirements are quite low. It can be moved by any game with 2GB of RAM, a quad-core processor, and a Mali-T860 GPU. In the case of Apple, all iPhones with an Apple A9 or higher can enjoy it. Its weight is approximately 2 GB and we can enjoy it for free, with in-app purchases. ‘League of Legends: Wild Rift’ can now be downloaded on mobiles: finally it is possible to play ‘LoL’ anywhere