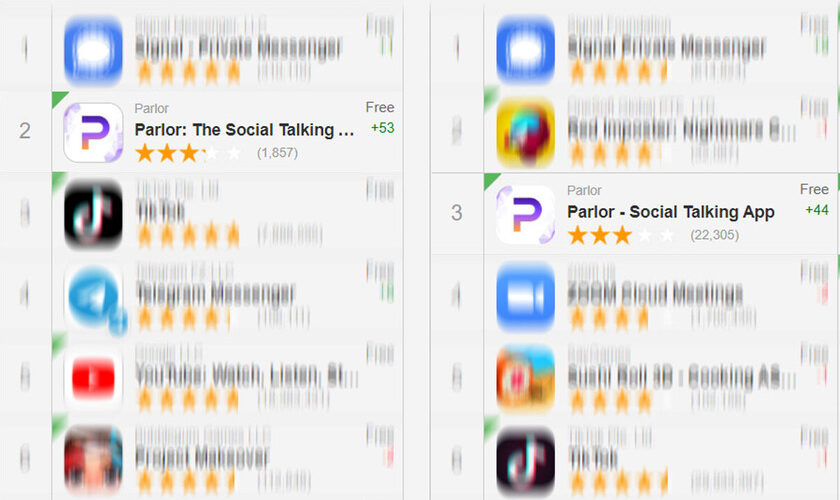 Google and Apple kick Parler out of their stores and Parlor, which has nothing to do with it, sweeps the download lists

After the assault on the Capitol on January 7, big technology woke up from its slumber and began to take action. First, with temporary blocking of Donald Trump’s account, then with the indefinite suspension and also affecting related platforms such as Parler, which was removed from Google Play and the App Store Recently.

Parler is a relatively recent social network, launched in 2018 and which reached 8 million users. Last Friday, Google removed it from its store for the “publication continues inciting continuous violence” and Apple took the step the next day. In the absence of Parler, Parlor, a totally different app, has risen dramatically in the download charts.

What happened to parler

Lets start by the beginning. Parler is a social network created by John Matze and Jared Thomson in August 2018, as an alternative to Twitter and Facebook. It came with freedom of expression as the flag, at a time when Twtiter had not yet taken action against the president, but had banned some like-minded profiles, such as Milo Yiannopoulos.

Two years later, after Twitter began including advertisements in some of Donald Trump’s tweets for being “potentially misleading,” Parler reached 8 million users in December, gaining popularity in part encouraged by statements of electoral fraud following the results of the November elections.

Then, at the beginning of January, the assault on the US Capitol took place and the technology companies found the courage to do what they had not dared in the previous months, banning the president of the United States: Twitter, Twitch, Shopify, YouTube, Facebook, Instagram, Snapchat, TikTok, Discord, Pinterest, and Stripe have removed or limited the president’s account or stopped offering services to their campaign. 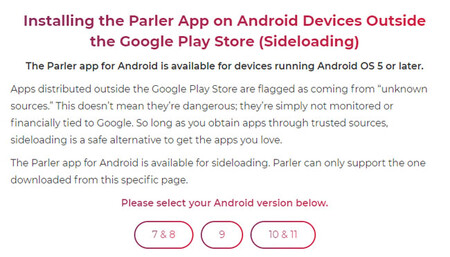 With Parler out of stores, the only way to download it – on Android – was from its website, which is no longer available

As a result of the assault on the Capitol, Google removed Parler from its store last Friday for inciting violence on an ongoing basis, and Apple removed it from the App Store on Saturday after finding “direct threats of violence and calls for illegal action.” Outside the stores the only way to download Parler was from its website, which has been deactivated a few minutes ago after Amazon AWS suspended your account.

We have seen time and again how, when an application has problems or controversies, another application takes up the baton. For example, after the notice with the new WhatsApp privacy policy, Signal had trouble keeping up with verifications of new accounts a few days ago. As a consequence, WhatsApp alternatives, such as Telegram, have risen in the lists of most downloaded applications in the application stores.

In the absence of Parler, Parlor rose between 40 and 50 positions in the following days

The case of Parler, however, is somewhat different. The app that is benefiting from Parler removal is Parlor, a totally different application, and that it has nothing to do with Parler or his concept, beyond having a similar name and being a social app.

Well, it’s an exciting Sunday for the makers of Parlor — not Parler. #spellingishard pic.twitter.com/cvc0NgAA2q

According to SensorTower, Parler was ranked # 1 on the App Store on Saturday. The next day, Apple removed Parler from its store and Parlor came in at No. 2, climbing 53 spots in one day. Interestingly, on Google Play, Parler did not reach the top of the rankings since November, and was around position 40 before his elimination, but on January 10, Parlor rose 44 positions and was planted in the Top 3. 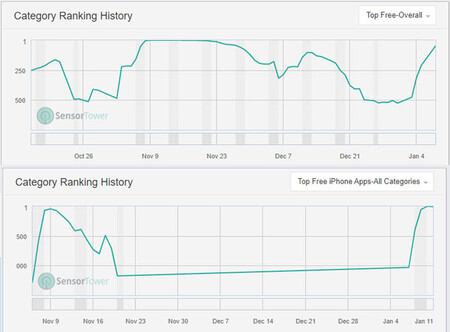 Above, Parler’s ranking before its removal from the App Store. Below, the Parlor ranking. SensorTower graph

We have frequently seen unscrupulous developers copy the name of applications or games that are not available in stores to win downloads, although this is not the case. Parlor came earlier, launching in 2014 or, what is the same, four years before Parler. You are simply a recipient of collateral damage.

And to all this, what is Parlor? It is also a social application, although far from being an alternative to Twitter. With a series of thematic “channels”, the application puts you in contact with another person who wants to talk about the same topic, opening a voice conversation. Is, something like chatroulette, but only with voice. 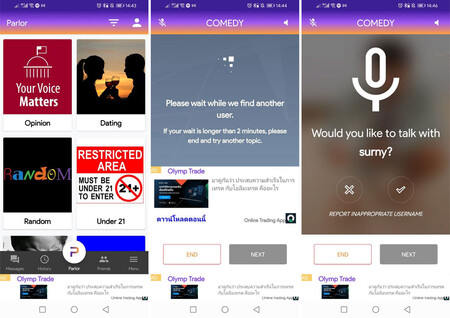 The application itself is normal, with a Average score of 2.9 on Google Play, quite a few ads and a somewhat outdated interface, although it can hardly be blamed for being receiving an avalanche of users in recent days as a result of the fall of another.

When searching for Parler on Google Play, a warning appears; when doing it in the App Store, the first result is Parlor

Currently, Google Play displays a notice that Parler is not available in its store, offering you instead a number of applications, among which, incidentally, Parlor is not found. In the App Store, if you search for Parler, the prominent result is Parlor, which explains the download boom in recent days. 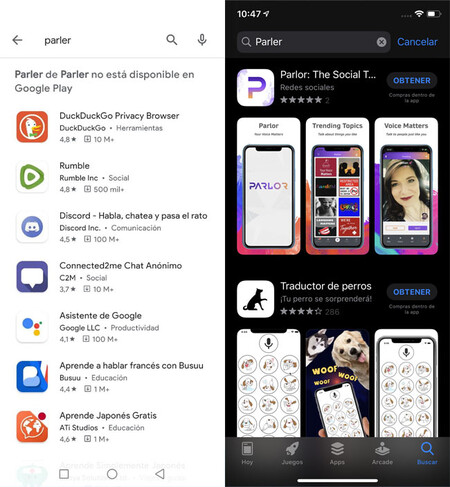 Searching for Parler in Google Play, and in the App Store

Errata, inattention or sheer coincidence, whatever the reason, it is clear how important it is for app stores to display accurate information about what they have and what they don’t have, to avoid that the user ends up downloading something different from what he was looking for, with the security and privacy problems that this may entail.