Google and Google Maps will begin showing vaccination points against COVID-19, first in the United States

Google does not stop making modifications to its search engine and app ecosystem since the pandemic caused by COVID-19 began. Since the alarms that were later deployed worldwide began to sound, the Google search engine has progressively shown more and more information about it, so that everything was more accessible to the public.

In December, for example, Google began to report which vaccine was available in each area, so that users knew exactly which variant they were going to apply when their turn came. Now Google begins to advise where we can find vaccination points. 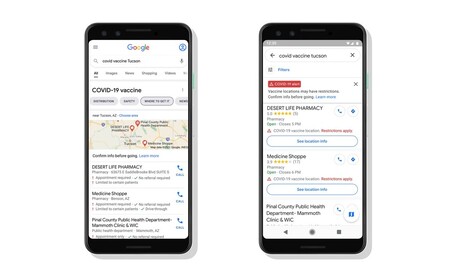 Google itself has been in charge of announcing the next modification it will introduce both in your search engine, accessible from any browser with an Internet connection, as from Google Maps. The changes will take place this week and starting from the United States, probably with the aim of being deployed globally.

Both the Google search engine and Google Maps will begin to show the areas where we can get vaccinated against COVID-19. Let us remember that the United States operates in a different way from many other countries, with vaccines distributed and applied in a different way. We do not know if expanding this function to other countries will direct us to outpatient clinics or health centers. It will have to be verified once it occurs.

Meanwhile, Google will advise of the vaccination points in the states of Arizona, Louisiana, Mississippi and Texas, and the rest of the states of the country will soon follow. Google also announces that other countries will follow the United States so it is logical to think that it will be a functionality activated worldwide in the coming weeks.