Who else and who has done crossword puzzles and self-defined at some point in their life. We have all had long trips to entertain, or waits so long that one wished we could cut as short as possible. The gap in the paper is now filled by the mobile in a way and it’s their games that make time fly by.

Especially if they are games like Mad pixels, a title with such simple rules that we can learn them in a minute and that becomes more and more challenging as we complete levels and progress. In addition, due to its approach, it is powerfully reminiscent of the much appreciated sudoku puzzles, which is why it may gain followers among the most staunch fans of the latter. 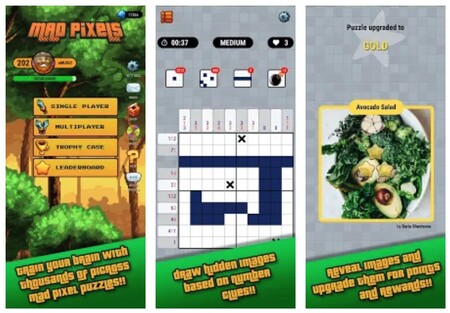 The operation of Mad Pixels is, as we said before, extremely easy to learn and yet very addictive. We have before us a board of 10×10 squares (at least in the simple version) and we have to paint sectors based on what the board itself tells us. This can be learned quickly in the tutorial that introduces us to the game, of course.

Once we are playing, we must go deciding which areas of the board to color and which areas of the board to leave blank based on the indications of each of the lines and columns. These will tell us how many blocks we have to put, the order and the number of squares they will occupy. The rest is up to us doing our guesswork so as not to make mistakes and lose lives that make us have to start over.

Easy to learn, easy to get hooked on

At our disposal we will have, by the way, X’s that we can place wherever we think we don’t have to fill in, in the same way as in the most classic Minesweeper we could mark suspicious boxes with flags and thus help us in the calculations. An entertaining game that, however, it is better to remove the music before going crazy. The latter is only a recommendation.

In Mad Pixels we will also have various levels of difficulty and the ability to play competitive games against other online users. All this to complete board after board and thus paint a much larger picture that will be completed once each round is finished. Without a doubt, a very well designed game that will help us kill those free moments among other tasks. Especially since we can exit the game whenever we want and return, picking up where we were going.