FacebookTwitterPinterestEmailWhatsApp
Home » Pokémon Go broke its revenue record in the first half of the year despite the pandemic, according to Sensor Tower
Applications

Pokémon Go broke its revenue record in the first half of the year despite the pandemic, according to Sensor Tower

It seems like yesterday, but Pokémon Go has been with us for four years now. Of all of them, and according to Sensor Tower’s measurements, 2019 was the best year for Nianticwith an estimated income of $890 million. The surprise is that the good news continues in the first half of 2020.

According to Sensor Tower, Pokémon Go has broken its record for integrated purchasing revenue in the first half of 2020, despite the COVID-19 pandemic that has forced millions of people to stay in their homes for much of this year.

A good year for Pokémon Go

Pokémon Go is an augmented reality game with a strong focus on exploration: is not meant to be played from homeYou’ll need to get out on the streets and go to specific locations to capture Pokémon, fight in gyms or obtain items from Pokeparades. A 2020 marked by the COVID-19 pandemic and a multitude of confinements around the globe would logically have reversed the positive trend in Pokémon Go income, but nothing could be further from the truth. 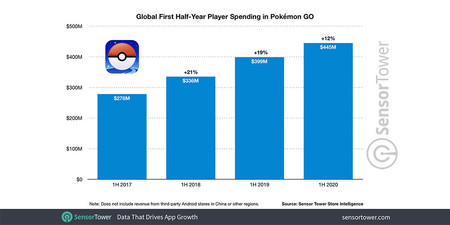 Sensor Tower has not shared its estimates on a month-to-month basis, so it is not easy to see the real impact of the coronavirus on Pokémon Go, as let’s remember that confinements did not start in many regions like Spain until well into March. On balance, however, the first half of the year is not only positive, but it has broken records.

It was precisely at the end of March when Niantic announced a series of changes to make it easier to play from homeThe PokéBall map is a good example of how to decrease the distance to hatch eggs, more gifts at PokéParadas, more PokéBall gifts, or increase the density of Pokémon on the map.

Telling his whole story, according to Sensor Tower The United States has been the most lucrative country for NianticThis generated 35.4% of all player spending ($1.3 billion), followed by Japan and Germany.

Another interesting detail is that most of the revenue comes from Google Plaand (53.6%), while revenues from the App Store would remain at the remaining 46.4%. In downloads, there is also a higher number in Google Play: 450 million (78.3%) compared to 125 million in the App Store (21.7%)

Pokémon Go broke its revenue record in the first half of the year despite the pandemic, according to Sensor Tower