Quibi, the ‘vertical Netflix’ that wanted to dethrone Instagram and TikTok, announces its closure seven months after its launch

At the beginning of the years we knew about Quibi, a mobile-based streaming platform created by Jeffrey Katzenberg, former director of Walt Disney Studios and founder of DreamWorks, and Meg Whitman, CEO of eBay and HP a few years ago. Among its peculiarities were the possibility of viewing the shows vertically or horizontally on the mobile.

With an official debut in April this year, and just one day after the launch of their app for Android TV, Fire TV and Apple TV, its creators have announced the closure of the service arguing two possible reasons: that the idea was not powerful enough to justify another streaming service or the timing.

Ahead of his time?

Quibi was launched as a project of more than one billion dollars with the collaboration of Hollywood stars such as Chrissy Teigen, 50 Cent, Darren Criss, Kiefer Sutherland or Liam Hemsworth, as a streaming service focused on the mobile and short content, less than ten minutes.

The idea was to consume this content on the mobile at any time, any place and in any way, and that is that the content could be reproduced both vertically and horizontallyIt is especially optimized for vertical use, similar to the application stories of Instagram.

Seven months later, its creators have announced the closure in a long blog post, hours after The Information and WSJ brought the news forward. Quibi closes and the company is looking for a buyer for your content and technology assets. 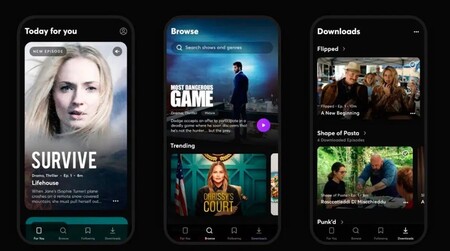 In their blog, its creators, Jeffrey Katzenberg and Meg Whitman, claim to have created the best version of Quibi they could imagine, but not enough to achieve success. Among the possible reasons are that the existence of a streaming service with its characteristics was not justified or timing, with a launch in the middle of a pandemic.

Ironically, the announcement of Quibi’s closure comes exactly one day after they launched their official application to enjoy content in the traditional way, on TV, with the version for Apple TV, Android TV and Fire TV. In our test, the Quibi app gave us a good feeling, although that is not enough to guarantee its success and viability.

Quibi, the ‘vertical Netflix’ that wanted to dethrone Instagram and TikTok, announces its closure seven months after its launch