small video clippings that can be shared

YouTube cannot be said to have lost the throne of video platforms as it remains the most popular portal in the world. However, this importance is increasingly threatened by new video consumption, both through the web and from apps. Netflix, Disney +, TikTok … And especially Twitch, a content platform primarily geared towards gamers that YouTube watches very closely. And that’s exactly where the Google platform is aiming with its most recent test. 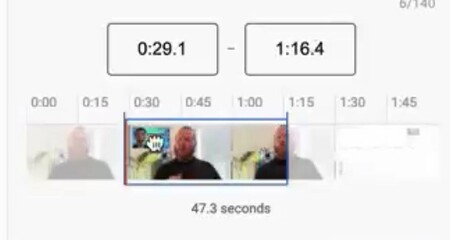 Until now we could share the links to YouTube video / streaming just by copying its URL; in addition to having the share arrow right in the content options. This way of sending videos is a nuisance if the person who shares them you just want a fragment to show: Although it is possible to mark the starting point, a way to share a specific portion and personally selectable by the user was lacking.

The clipping feature for sharing already exists and is currently in testing within YouTube. This is what the platform ensures on its help page: shared videos are called clips; any fragment can be selected with a duration between five and fifty seconds; The clips are suitable for videos already uploaded to YouTube and for those that are reproduced in streaming; and the fragment will loop over the entire video.

Today we are launching an experimental version of Clips on YouTube. Check out videos on the Creator Insider channel and test it out yourself!

Clips are 5-60 sec, shareable, segments of content (Live / VOD) that live on top of the original video.

The new functionality is in testing within YouTube for a very specific number of creators. Once these tests are concluded, and provided that YouTube considers that they were satisfactory, it will display the clips to the rest of the users.

To discover if we are within the test, we must look for the scissors icon on the play buttons, both on the web and on Android. IOS will come later.