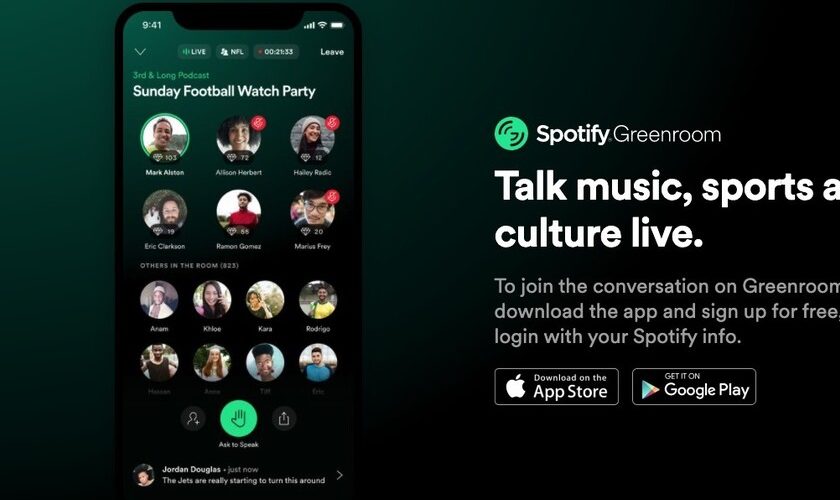 It is difficult to understand how fashions work and how some things become a trend despite going, in theory, against the advance of others. At a time when almost all platforms are betting on video and ephemeral stories, ClubHouse has managed to cause a sensation and you are forcing the rest of your competition to make a move in the field of audio.

The last to do so has been Spotify, a veteran in this field that, if before it had music and podcasts, now it also moves in the field of audio rooms. Rooms in which to talk about any topic, which are called Greenroom, they arrive through a dedicated app and are available to almost everyone from today.

The Greenroom app is now available on iOS and Android

ClubHouse is increasingly finding competition in a market that does not stop receiving bets from heavier players (Instagram, Facebook, Twitter, LinkedIn, Telegram), as is the case of Spotify that today releases its Greenroom app for almost the entire planet (135 countries). Greenroom was already available in a limited beta phase but that has come to an end and we can download it and start using it whenever we want.

With Greenroom we can organize live audio rooms with a few “broadcasters” and many “listeners” and whose session we will start with a Spotify account. We will only need the account so it will be worth us to be Spotify clients in its free mode and at the moment, and Spotify has not communicated otherwise, Greenroom is also free both to broadcast and to listen to.

If we are afraid that these audio rooms will be lost forever, we should not worry then we can record them to download them later. Thus, Greenroom becomes an ideal place to record podcasts that can later end up on the parent platform itself, Spotify, or on other services. Or maybe we just want to record them for different reasons. But be careful, because Spotify has already thought that we would want to charge to organize these audio rooms in Greenroom.

The service is released today for everyone with a statement in which Spotify itself talks about a fund for creators. A fund that will allow Spotify to pay the creators of this type of audio room live on Greenroom based on their popularity and user interaction. We do not know much more about this fund for creators but Spotify has already enabled a form in which, if we want, we can sign up and receive more information later.

As we have said, Spotify has created Greenroom as a standalone app and can be found both in the iPhone store and in the Android store. We leave you the links below as they are currently in the early access phase and may not appear in your searches. Remember that Greenroom is a free app and we will only need a Spotify account to log in.