Fruit Ninja is one of the most popular mobile games since its inception, having accumulated more than 1.6 billion downloads. Ten years later, HalfBrick Studio, its creators, have just launched its successor: Fruit Ninja 2, now available on Google Play and the App Store.

The fruitwall saga continues in a revamp that includes more mini-games, unlockable content as you go, new characters, battles against other characters and lots and lots of fruit waiting to be cut.

Since Fruit Ninja’s original inception, ten years agoHalfBrick Studio, also behind other bombers like JetPack Joyride, has kept the original game with different updates, to such an extent that at some point it split into Fruit Ninja Classic, which is paid and more similar to the original release.

The most famous game of cutting fruits with the finger has finally an official continuation, maintaining many of the elements of the original, with some additions more typical of today’s games, such as the leagues, events and battles between players.

Of course, the basis has not changed, and the main objective – beyond the new mini-games that have been included – is cut quickly and efficiently flying fruits by means of agile finger traces, with different game modes such as arcade, zen or classic.

Fruit Ninja 2 is now available on both Google Play and the App StoreIt is a free game, although with integrated shopping, with which you can buy gems and season tickets. 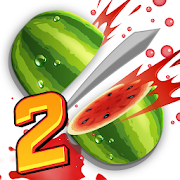