The app was the most downloaded in January, according to Sensor Tower

Despite the fact that there are millions of options in mobile phone app stores in thousands of different categories, messaging and social media apps continue to fly above all their competition. In a hyper-connected world like ours, communicating with our contacts is paramount, either through more traditional messages or publications of photos and videos.

So no wonder Telegram has risen to number one in the top downloads of the month, according to Sensor Tower data, with a good part of its competition hovering around the top positions. The tsunami caused by the new WhatsApp privacy conditions has placed Pavel Durov’s app as the most popular of the month.

Telegram wins and WhatsApp almost falls out of Top 5 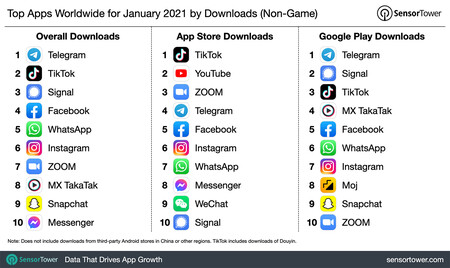 According to Sensor Tower, a market analysis company known for always having an eye on the world of digital app stores, Telegram achieved 63 million installs in the month of January of this 2021. A considerable figure, but even more if we compare it with the same period of 2020.

With the data in hand, Telegram managed to increase its downloads 380% compared to the month of the previous year. An avalanche of users caused largely by the latest changes in the privacy policy of a WhatsApp that, in the face of the stampede, decided to postpone the entry into force until May. However, the hegira of users continued, temporarily lifting Signal to the top spots and then dropping most of its weight on Telegram’s shoulders.

Despite the fact that Telegram has grown almost all over the world, India has been the country in which Pavel Durov’s company has capitalized the majority of its users, with 24% of new arrivals. After India, Indonesia followed with 10%. And following in the wake of the growth of this app of Russian origin, a Chinese one has arrived, with the 62 million downloads of a TikTok which continues to take market away from Instagram and other social video networks.

After Telegram and TikTok, the persecuting trio has been formed by Signal, Facebook and WhatsApp itself which has helped Telegram to rank first. As we said at the beginning of the article, there is nothing more popular right now than messaging and social networks. And just take a look at the chasing quintet to see Instagram, Snapchat or Messenger among them.