these are the world tops of music and podcasts

Spotify has enabled playlists with the most listened to in 2020. Around the world, by country, the best songs, female artists … And it has also communicated the five most played podcasts, also by country and globally.

As usually happens in the last month of the year, the annual compilations begin to emerge among the different content tops. For example, we already know the best applications of the year on Google Play, YouTube has also communicated the most popular videos. And now it’s Spotify’s turn: the famous music streaming platform lets you listen to the most popular songs of the year, also the podcasts that were reproduced the most.

Most listened to 2020 by country and in the world 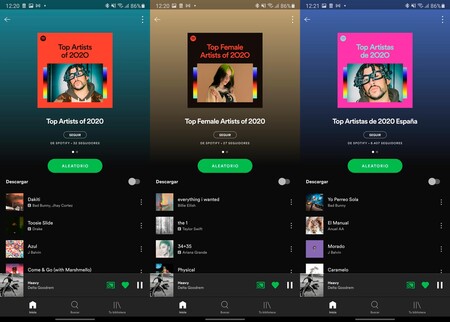 Today, December 1, has been the day used by Spotify to reveal the music charts of the year. By artists, by songs and by female voices, both globally and for each country. As regards Spain, Bad Bunny was the most reproduced throughout 2020. Curiously, Spotify ensures that this artist also dominated the world charts, a milestone for Bad Bunny.

Then we leave you with the links to the lists with the most listened to on Spotify during 2020, both globally and in Spain. Click directly on the link to open each list in your mobile app.

As for podcasts, this is the global top:

Finally, Spotify has communicated the five most listened to podcasts in Spain during 2020. They are as follows:

Spotify has not yet activated the personal lists with the most listened to by each user during 2020But hopefully these playlists will appear in apps in the next few days. We will check the application in your search.

The most listened songs of 2020 on Spotify: these are the world tops of music and podcasts