this is the fashion game that is sweeping the youtubers

‘Higher or Lower’ has been a popular game for a long time, although in recent weeks it has been reaping successes among YouTubers and other content creators. It can be downloaded on both iOS and Android and its mechanics could not be simpler, although different from everything we usually see in other games.

The main objective is guess what is searched more or less on the internet. For example: what are you looking for more, Beyoncé or Einstein? Every time we get it right we will score a point, so the goal is to reach the maximum possible number of hits.

A different and addictive game 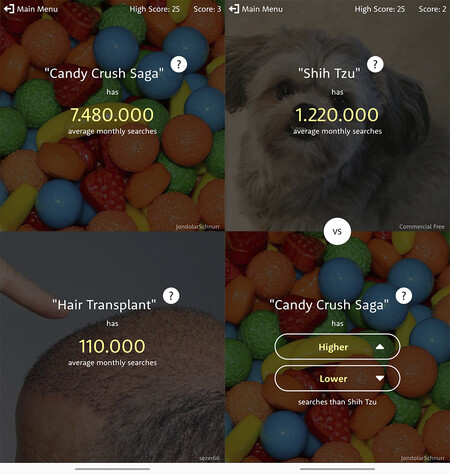 In recent weeks, youtubers such as Ibai, Ander or El Rubius have returned to playing Higher or Lower, a game that has been present on iOS, Android and the web, although it has not been updated since 2018. The mechanics are simple, we are shown two words and we have to guess which one is searched the most.

The figures are not exact as they are out of date, but it is not difficult to guess that ‘Vodafone’ will have more monthly searches than ‘Jackson Five’. For each hit we add a point, the objective being to go as far as possible. The game is completely random, so you can be asked difficult or easy questions at any time.

Regarding the themes, we have a general mode in which we will be asked questions about all searches on the network, although we will be unlocking blocks of questions by themes, more specific on specific issues.

The game is completely free and you can download it for iPhone and Android. It has not been updated for a while, but still quite addictive and has already accumulated more than five million downloads since its launch.