Back in May, when the coronavirus pandemic forced many people to be homebound, Tinder announced that before the end of the year they would launch an option for virtual dating via video call. In July the company began testing the invention in thirteen countries, including Spain, and now finally opens the tap to all users.

That’s how appointments come Face to Faceor face to face, video calls by mutual agreement and only for those users who have previously made matches, under strict rules that prohibit sexual content, respect for the other person and the prohibition of interaction with minors.

Tinder’s virtual appointments are activated for everyone

Tinder’s virtual appointments were available in a handful of countries from July: USA, Brazil, Australia, Spain, Italy, France, Vietnam, Indonesia, South Korea, Taiwan, Thailand, Peru and Chile. Now this limitation is removed and they are available to all its userswherever they are.

Under the name Face to Face, or face-to-face, this is an option available in the chat after matching a person. It is opt-inso that both people must agree to use the video calls to unlock them. The funny thing is that the application does not let you know if the other person is interested in activating them or not. 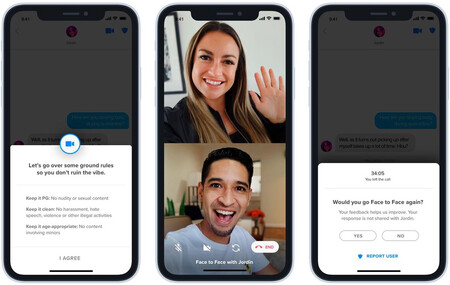 After unlocking them, having one of these virtual appointments via video call is as easy as in any other video call application, although you must first check the rules. No sexual content, illegal activities, violence, harassment or minors.

Tinder seems to be satisfied with the trial period of its Face to Face feature, after announcing that it is activated to everyone after receiving positive feedback from the community. In the previous trial period, it was available not only in some regions, but only in some specific matches. Now they are starting to reach everyone.