The famous Twitter client for iOS is renewed to offer support to the Social network API v2. In return, Tweetbot changes its monetization model from direct purchase to subscription. With a collateral effect: Tweetbot 6 for iOS is now a free download app.

Few applications to access Twitter have the fame and number of users it treasures Tweetbot on iOS and MacOS. The official apps of the platform join the logical first place; with a second place where Tweetbot has become strong, even despite the controversies. The app has been renewing its version on iOS forcing its users to acquire the new Tweetbot every time. And now, with version 6, history repeats itself. 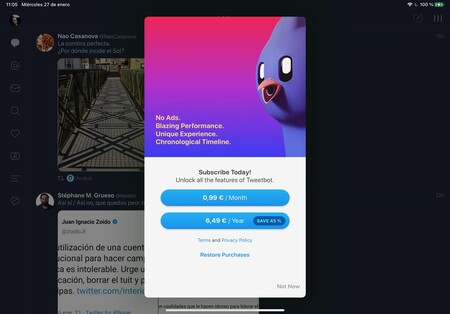 The new version of the popular Twitter client is now available on the App StoreFor both iPhone owners and those who own an iPad (or compatible iPod). Tweetbot 6 is renewed with an improved appearance and also more functionalities, all thanks to including compatibility with the latest Twitter API V2. This implies that Twitter users will finally be able to read polling tweets, for example. Although at the moment they cannot create such polls nor do they have access to options like the Fleets.

Tweetbot joins the trend of subscriptions in apps to get a better performance from development. Version 6 is free to download and almost useless in practice: with it you can not tweet or reply or retweet. In fact, Tweetbot 6 does not even allow you to bookmarks, a sign that the application is only suitable for those who use Twitter as a news reader. Nothing else; unless the subscription is paid.

The free version of Tweetbots 6 is only for reading tweets. If you want to interact on Twitter you need to pay the subscription

Tweetbot 6 asks for € 0.99 per month or € 6.49 per year for the full version of the application. Owners of previous versions of Tweetbot have no discount and they will have to pay for the app again to be able to use it. Also, Tweetbot 5 has disappeared from the App Store and will not appear again for new users. And we will see if the developers continue to update it or end up focusing only on Tweetbot 6 (which would be the most logical).