Huawei took advantage of the launch of his Huawei Mate 40 series to show us his operational version of your mapping applicationPetal Maps or simply Maps. The application is already available in App Gallery as a beta, it can be downloaded to other Huawei terminals through your APK and we have tested it.

The Petal Maps and Google Maps comparisons are inevitableEspecially since in many ways Petal Maps seems to be inspired by Google maps. In this entry we will compare Google Maps with the newcomers maps of Huawei, seeing what it has and what it lacks.

Comparisons are hateful and in the case of Petal Maps versus Google Maps, the biggest problem is that an application has just been born, while Google Maps celebrated its fifteenth anniversary this year. Perhaps to shorten the distance, perhaps to make it easier for those coming from Google Maps, Huawei has decided clone much of the Google Maps interface for your maps.

The style of Petal Maps is virtually the same as Google Maps, including colors, styles, and even icons. It’s not an exact copy, and there are slight variations, but, if it weren’t for the search bar, which is up on Google Maps and down on Petal MapsIt would be quite difficult to differentiate between the two maps with the naked eye. 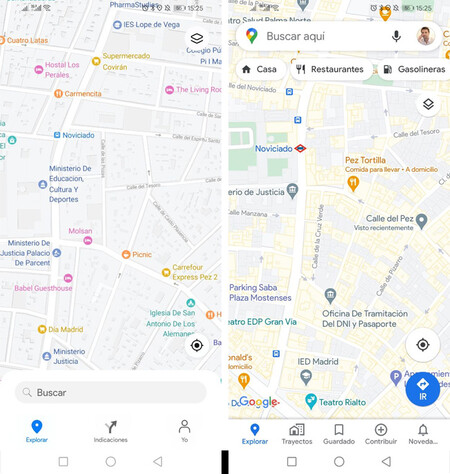 The maps are quite similar, although as you would expect from their greater experience, Google maps show with more detail on green areas or commercial areasIt is noteworthy that the Huawei maps, which have been launched in 140 countries and regions, include the geometry of the buildings (not in 3D as in Google Maps, however). 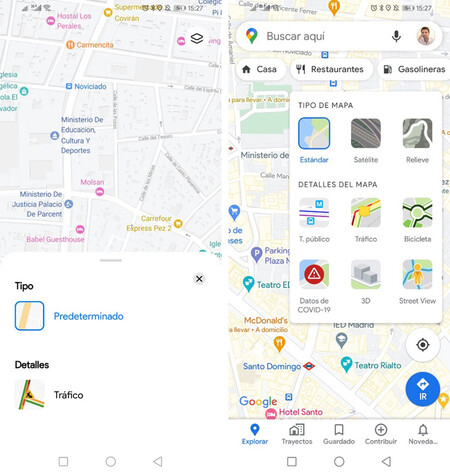 Google Maps started with the standard layer and the satellite view layer, and over time it has gained all sorts of additional map detail, to the point that it even has a layer to show COVID-19 data. Petal Maps, as you might expect, starts with the basics: a standard layer with map view and traffic overlay.

In contrast, today Google Maps has standard, satellite or relief views, overlaying layers of public transport, bicycle, 3D viewThe following is a list of the data that is available on the website, Street View, COVID data and traffic data. 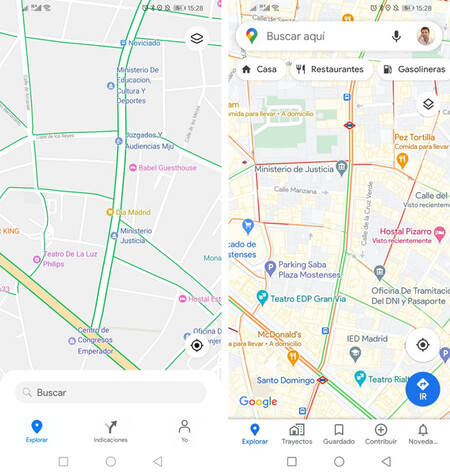 Both coincide in the traffic view, although the crowdsourcing of Google Maps allows some most up-to-date data in real time. At the same time, Petal Maps shows traffic on the same road as completely green, while there are sections in orange or red on Google Maps. 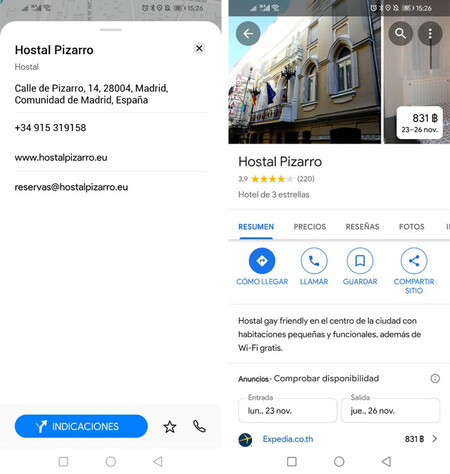 Considering that Petal Maps has just been born, it’s a good thing that its database of places doesn’t start completely empty. It has a number of points of interest incorporated, including a little information about it.

The information of the points of interest, however, is much more rudimentary than in Google Maps. No photos or reviewsand the information – which in most cases is limited to the address and hopefully the phone number and web address. Location information is one of the aspects that are a little greener on Petal Maps at the moment. 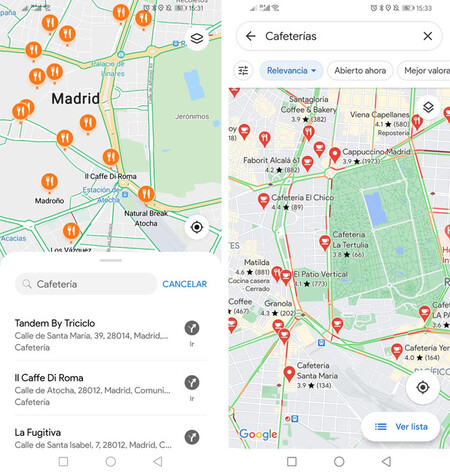 As we mentioned before, Petal Maps includes several businesses and points of interest in its database, so it’s not hard to find a specific placeunless it’s very recent. Like Google Maps, the application has quick searches for coffee shops, hotels, parking lots, and other common searches.

The results are a bit like using Google Maps in incognito mode, because Huawei doesn’t know -at least for now- your tastes so he can prioritize the results like Google Maps does. Otherwise, the results of a search are shown both on the map and on a list. 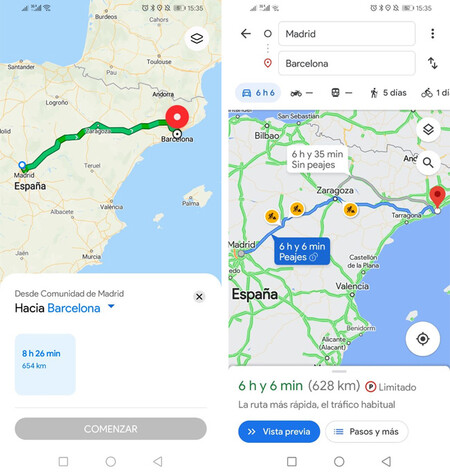 Petal Maps doesn’t have everything that Google Maps has, but at least it includes the basics: maps, routes, and navigation. Creating a route from point A to point B is just as easy as on Google Maps. Routes also overlap in many cases, although estimates of how long it will take vary widely from application to application, with more than 2 hours apart for a Madrid-Barcelona trip.

You would have to take the route to be able to empirically buy which mapping application is closer to reality, although as we mentioned before, Google Maps has more up-to-date traffic data obtained through the Anonymous data from drivers with Android phonesEven if you manage to imitate Huawei, you will not have such a large user base if only Huawei phones are included. 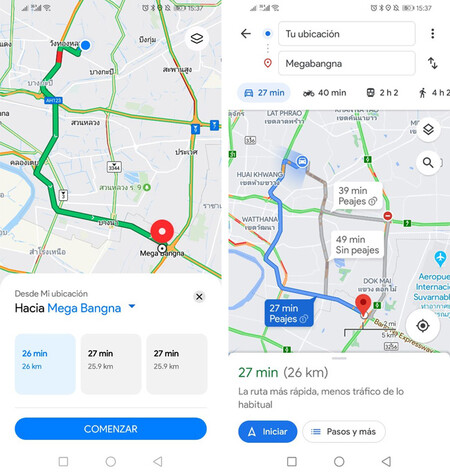 Needless to say, Petal Maps at the moment can only generate car routesThe first is a route on the Internet, while Google Maps has increased its types of routes to include motorcycle, bicycle, public transport and walking. 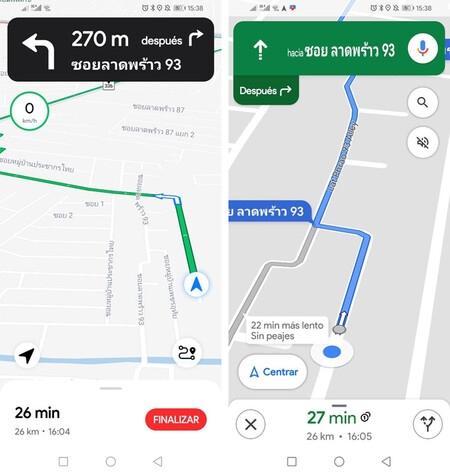 In addition to viewing the route, you can also use Petal Maps as a navigation application. Again, the inspiration on Google Maps is evidentwith a design that, if it were not for the use of a different colour, would be almost identical.

Petal Maps navigation is very similar to Google Maps, and the speedometer is included that took so many years to get to Google Maps. There is no missing button to center the view and see the route, although there are no voice settings, site search or voice search… at least, not yet. 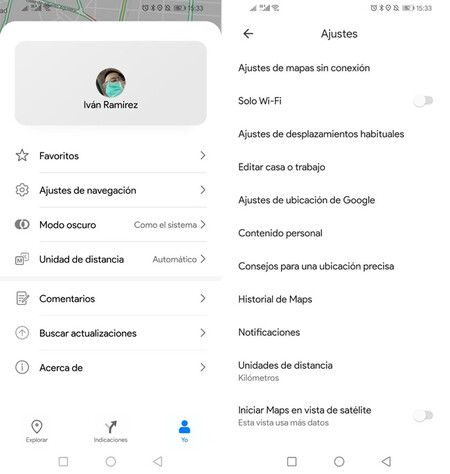 Considering that Petal Maps is a much simpler application than Google Maps, it is foreseeable that its settings will be much more meticulous. They would almost fit on a single screen, if it weren’t for the navigation settings, where you can choose the theme and language of voice navigation.

Apart from that, in Petal Maps you can choose the unit of distance and consult the places you have marked as favouritesby playing on the star icon. Meanwhile, the Google Maps options add up to a dozen pages, some with more options inside.