WhatsApp cannot be used on more than one mobile phone at the same time in the beta of the multi-device mode, according to WaBetaInfo

We know that the multi-device support of WhatsApp is yet to come: after many leaks, even Mark Zuckerberg has confirmed it. But there are still many details to discover, such as what devices will be supported. The answer to this question seems to be a bit disappointing, according to WaBetaInfo.

Based on a screenshot with information about the optional beta to test multi-device support, initially WhatsApp cannot be used on two phones, but it is considered as an option to maintain the connection on WhatsApp Web, WhatsApp for PC or Mac and Portal without having to keep the main mobile connected.

Today, you can use WhatsApp at the same time on your mobile and on another site through its web or desktop version. The downside is that it is necessary that keep the mobile on and connected to the Internet, as it is used as an intermediary for communication. Also, as soon as you use WhatsApp on one site, it closes on another: only one extra session is supported in addition to the mobile one.

This is about to change with multi-device support, of which we know some details. Up to four devices, independent of the mobile and maintaining encryption. Those who dreamed of being able to use WhatsApp at the same time on several mobiles (or a mobile and a tablet), finally saw the light at the end of the tunnel, but apparently they will have to wait a little longer.

At the beginning of June, WhatsApp announced that the device mode could be tested in beta form in a couple of months. WaBetaInfo has had access to the information screen of said beta, where it is indicated that they can be linked four additional devices and a phone. 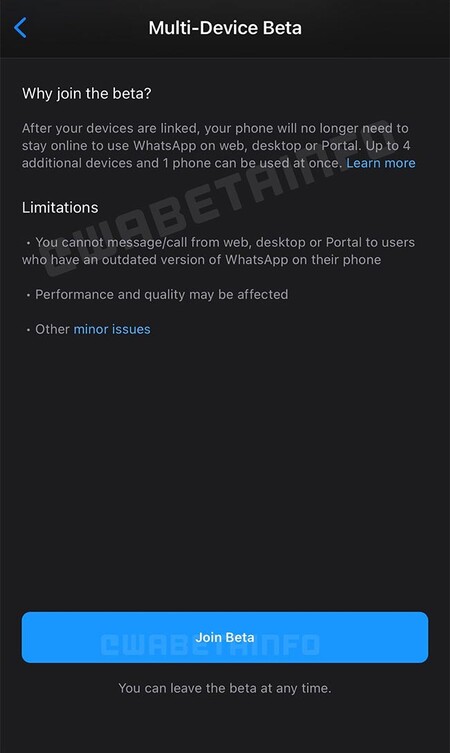 Although you can use WhatsApp on these four additional devices independently of the mobile – which after the initial link, may be off or offline – this seems to indicate that multi-device support is focused on stay signed in on non-mobile devices. Specifically, WhatsApp Web, WhatsApp for desktop and Facebook Portal sessions.

This is somewhat disappointing news for those who expected to be able to use WhatsApp at the same time on an Android mobile and an iPhone or an iPad, although there is always the possibility that it is possible to use more mobiles later. For example, the official version of WhatsApp for iPad is still pending, and the normal thing would be that it could be used at the same time as on a phone just like WhatsApp Web. We will have to wait.