In one way or another, each Facebook movement on any of its platforms is always accompanied by a certain controversy, although the latest cloud of dust that has formed around WhatsApp is of quite a caliber, and platforms like Signal are thanking it as they return to normal. The point is that WhatsApp has published a notice announcing changes to your privacy and the madness has been unleashed.

Almost immediately, WhatsApp users from almost all over the world (although it does not affect Europeans) have started researching the messaging market in search of a safer place to take refuge, and Elon Musk’s tweet inviting them to go to Signal it has not helped to stop the rout. So much so that not only WhatsApp’s visible head on Facebook has taken to Twitter to try to explain the changes but the company itself has created a page to explain what exactly it does with its users’ data.

What has happened, basically and in a very summarized way, is that WhatsApp has begun to warn of something that it has already updated in the past far from Europe. WhatsApp was going to start collaborate more closely with its parent, Facebook, by sharing more user data with it and with the other group companies. Private data? No, usage data in order to improve Facebook’s advertising services. 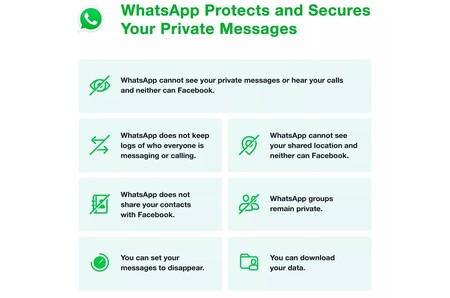 The eternal controversy over whether or not data from the private conversations of users (encrypted and without access by the company) is shared or not has been put on the table and the stampede of users towards other services has forced WhatsApp to move tab . And that file has been to prepare a page for their conditions explaining just that, that they do not access private information or their conversations. The problem, perhaps, is that have added more text to a section, that of their conditions of use, that the vast majority of users do not read. Fatten documentation that nobody consults.

So WhatsApp has added a new section to the help section of your website in which it indicates that they do not access the messages sent between the users of the platform, nor the text messages nor any type of attachment that is exchanged, be it a photo, a video or an audio or document file. They also do not access the location data. WhatsApp also emphasizes that it is possible to create chats with messages that self-destruct, in order to raise the level of security.

We will see if this message takes effect or not among its users, although everything indicates that it will not. As we have said before, the terms and conditions are not among the most read texts of online apps and services, and this message will probably go quite unnoticed. And the fear of Facebook moves can take a serious toll on WhatsApp. After all, they share the same roof.