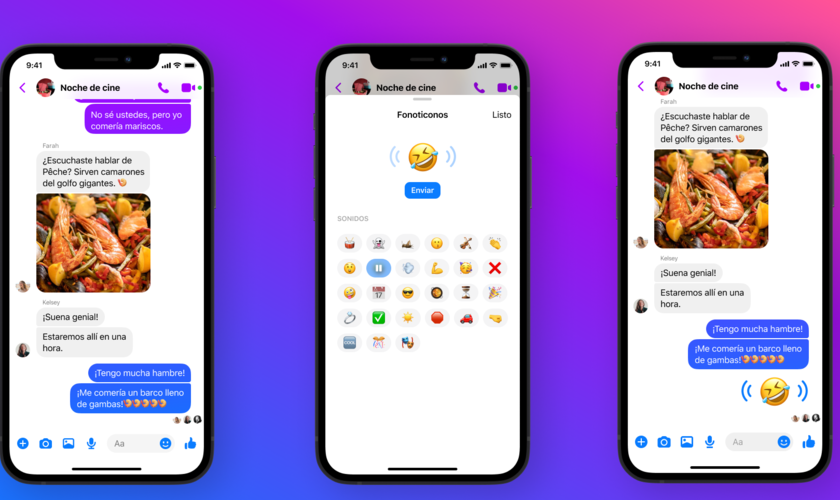 “words are not enough to express how you really feel”

This is what Facebook tells us through its Twitter account for its messaging app, Facebook Messenger, the site it has chosen to announce the arrival of a new type of emojis. It is a kind of combination between GIF and video, sound emojis such as those that already exist, for example, in Telegram.

Soundmojis, that’s what they have been called on Facebook. Maybe they would be called sonomojis in Spanish but that is something we will never know because Facebook has translated them as phonoticons. It is a new library of emojis created by Facebook and is now available in its apps, both mobile and other operating systems, and through the browser. Get ready, people who carry your mobile in silence, because you will miss half the experience.

Emojis that sound, the latest from Messenger

With the new phonoticons, Messenger incorporates a new form of communication that not only transmits images but also sounds. They are a new way of “send short sound clips in Messenger chat “ that will be activated automatically as soon as we have them in front of us, and that we can play again whenever we want, it will only be enough to touch the phonoticon on the screen.

“We present a complete library of Fonoticons for you to choose from and that we will update regularly with new sound effects and known sound fragments. Each sound is represented by an emoji, keeping the visual emojis we like so much, but introducing the effect sound.”

Among the first phonoticons with Messenger sound includes the most common, such as the sound of crickets, clapping, drums or an evil laugh that will accompany the ghost emoji. The violin will also sound and Facebook promises to update its gallery of phonoticons so that it is more and more complete.

In addition to this arrival of emojis with sound, Facebook offers some interesting facts about the use of emojis in general. For example, in Spain the most used are the emoji of the kiss with a heart, the red heart and the emoji crying with laughter, and the generation of ‘baby boomers’ uses the birthday cake a lot. Generations and customs, an unfathomable universe.