you can now send money in India

Sending money through WhatsApp is already activated for some users of the application in India: there they can make mobile payments by taking advantage of the infrastructure of the country’s banks. This way it is possible to pay the contribution to a gift, to buy products directly from another person and any other particular transaction.

WhatsApp’s history with mobile payments stretches back many months as we read about the addition to the platform. In fact, WhatsApp already introduced mobile payments in India in 2018, although at that time it was a beta and WhatsApp had to stop it because of regulatory issues. And now he’s trying again: sending money through WhatsApp is already active in India.

Sending money to more than 160 banks 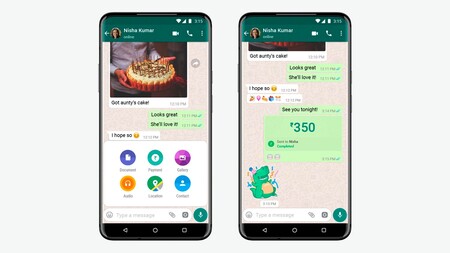 Facebook is committed to bringing WhatsApp mobile payments to the world, but has been tripping over it every time. In India, they have already had to stop the beta, just as they did in Brazil during June 2020: after introducing money sending using Mastercard and Visa platforms, the Central Bank of Brazil ordered the cessation of activity to ‘preserve a proper competitive environment’. Despite the setbacks, WhatsApp is moving forward.

As officially announced by Facebook, sending money is now officially working in India. Users in that country can pay their contacts from the application and as long as you involve them in the transaction have an account at one of the supported banksThe number of users is currently more than 160 (through the Unified Payment Interface or UPI). Initial testing will be available gradually to WhatsApp users in India, but for now is limited to about 20 million users (WhatsApp already had over 400 million users by 2019.) As confirmed by the National Payments Corporation of India (NCPI), with whom WhatsApp worked closely to bring payments into the country, the application has a free hand to expand.

WhatsApp has limited mobile payments to 20 million users in India. The country has over 400 million people actively using the app

The mechanism chosen by WhatsApp to send money to other users is quite similar to the Spanish Bizum. It is necessary to click on the payment button of the application (it is among the options for sending documents or location) and make the sending by attaching the amount of money. Previously you must register your bank details in WhatsApp: it is essential to have an account with one of the UPI’s institutions and a debit card.

Facebook ensures that mobile payments are designed with strong security and privacy. A personal PIN must be entered for each shipment and transactions are made using the UPI’s banking network.