WhatsApp took one of the most conflictive decisions in its history weeks ago, if we do not count the moment when it was bought by Facebook, with all the fuss that occasion. Due to the increasing implementation of WhatsApp profiles for companies, WhatsApp decided to update its privacy policy and had, logically, to ask its users to accept it. The perfect Storm.

In the new privacy conditions, WhatsApp asked its users to allow more information about their messages to be shared with its parent company, Facebook, although with nuances. This caused a rout of users to other platforms, to the point that WhatsApp itself had to go out to try to stop the flight. Now, WhatsApp has confirmed what will happen if the conditions of May 15 are not accepted: the app cannot be used. 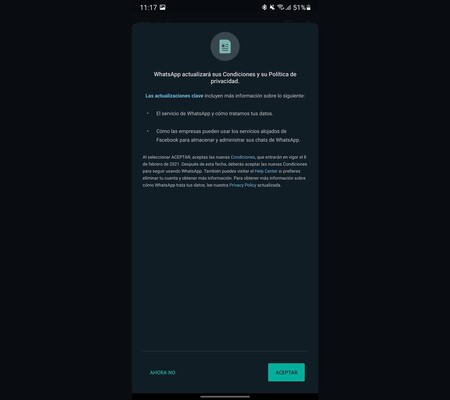 As we have said, the new privacy policy introduced by WhatsApp has some nuances. It is true that more data will be shared with Facebook, the parent company of the company and the one in charge of monetizing a service by advertising, WhatsApp itself, free for years. But it is also true that the affected messages will not be private between users (end-to-end encryption automatically) but the messages that we exchange with companies.

In addition to this, it turns out that these data exchanges between WhatsApp and Facebook are prohibited in the European Union, so it would not affect users residing in the Old Continent. Be that as it may, the rout of users occurred and now WhatsApp has anticipated that possibly not a few users of its platform will end up being expelled from it.

WhatsApp has confirmed what will happen if we do not accept the new privacy conditions that will come into effect on May 15. Simply, the application will gradually stop working. Initially, the ability to exchange text messages and files with other users will be lost. If we do not accept the new conditions, WhatsApp will not allow us to send or receive messages, whatever their content.

For a time, WhatsApp will allow us to continue making and receiving voice calls and also video calls, but this will also end up disappearing. As confirmed by WhatsApp to Verge, these voice calls and video calls will be allowed “a few weeks”. After this period, WhatsApp will cease to be operational for these users. In short, they will not be able to use WhatsApp again unless they accept the new conditions.

WhatsApp’s new privacy policy was supposed to go into effect on February 8, but WhatsApp decided to postpone its start until May 15, taking the opportunity to explain itself more clearly. Now, the entry into force has no going back. On May 15 we will accept or lose WhatsApp. Cone said Switch in Matrix: “our way, or highway.”