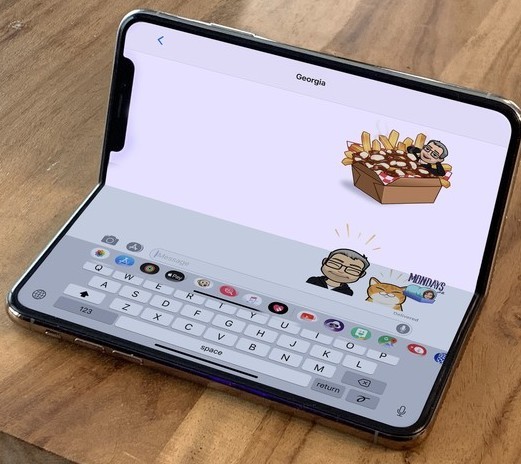 There’s a “folding” iPhone prototype, and Jon Prosser has described it

This time it’s not data from the iPhone 12, but Jon Prosser has posted on Twitter a brief description of what’s supposed to be on the table in the secret labs in Apple Park: a prototype of a folding iPhone. The company is investigating this concept to launch some kind of final device in the rather distant future.

But Prosser warns that this folding device does not have a folding screen. The current prototype would have two separate screensand a hinge would allow them to fold. The design would be very similar to what the iPhone 11 has right now, with rounded sides and stainless steel finishes.

A prototype is what it is: a prototype

The current prototype has two separate display panels on a hinge.

In addition, the terminal I wouldn’t have ‘notch as the edge hole of an external camera for Face ID would already be narrow enough to be well concealed by itself. Something similar to this prototype may be the LG V60 ThinQ, whose model with 5G was launched in February, but with a screen that is practically attached when deployed:

The memes are funny – but it doesn’t look like they just stuck two phones together.

Even though they’re two separate panels, when the displays are extended, it looks fairly continuous and seamless.

Does this mean we’re going to see a folding iPone with that design and features? No. It has to be clear to us that this is just a prototype, a proof of many more that Apple must be doing about the folding iPhone. Apple’s goal may be a much more advanced one, with a single folding panel and a completely different design – or it may be nothing at all.

Therefore, the best thing we can do is not take anything for granted, because there are many patents and prototypes that should be kept in a drawer, abandoned. Y it’s perfectly normal in the research and development departments of all companies.

There’s a “folding” iPhone prototype, and Jon Prosser has described it

Is there a way to reset my phone without losing everything?